Eyes in the skies – welcome to the Drone Team

Buxton Mountain Rescue Team has become the first Mountain Rescue England and Wales team to be granted approval by the Civil Aviation Authority (CAA) for the use of drones. The approval will enable the rescue team to be able to use the drones to search for missing persons in places where access is difficult or unsafe for team members.

The approval is the culmination of a project, which started nearly 18 months ago by two team members, Roger Bennett and Carney James Turner who had a chance conversation with staff of the Pure Buxtonmagazine.

The project started with an advertising campaign led by Pure Buxton, which resulted in contributions from organisations including Derbyshire County Council, High Peak Borough Council, Buxton Billerettes, Poynton Round Table and Women’s Institutes, together with many other donations from individuals who just want to help. In total nearly £10,000 has been raised to purchase the drones and train the pilots.

The team has eight trained pilots, known locally as the “Drone Team”, ready to be tasked to searching for missing persons on call outs.

Team Leader Neil Carruthers said “The approval from the CAA demonstrates that they have the confidence that the systems and procedures the rescue team has in place are safe and effective. I am delighted that we are the first mountain rescue team in England and Wales to successfully gain approval to use drones for search and rescue. The drones will allow the team to search areas such as boulder fields, water margins, moorlands, crags and difficult ground. The drone technology will complement our other search resources such as team members on the ground and the search dogs, all of which have an important part to contribute in search operations”.

“I would like to congratulate all the team who have been involved in the training and especially the pilots who have demonstrated not only a good theoretical knowledge, but also the ability to plan drone operations as well as practical competence in the safe use of our unmanned aerial vehicles”.

The team would also like to thank RUAS Unmanned Aviation Services , the drone training provider who have supported all of the pilots to gain certification and also Brendan O’Neil from Derby Mountain Rescue Team who has given up a great deal of his personal time to help train our pilots. 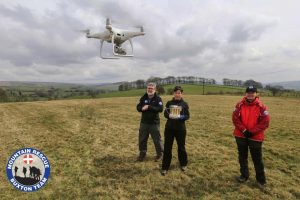 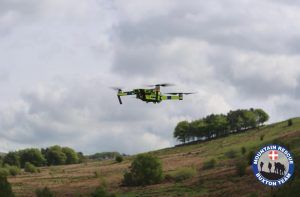 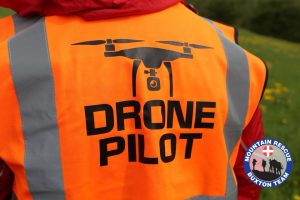 Buxton Mountain Rescue Team would like to say thank you to so many people for your support with this project to help us provide the “Drone Team”, now with their specialist “CAA approved” skills to help those in need  when in difficulty in and around the Peak District.