Two team members, who were fundraising for the Team in the centre of Castleton, were asked to attend a call-out along with Edale Mountain Rescue Team, at the request of East Midlands Ambulance Service.

A climber, who had been climbing in the Broken Buttress area of Stanage had fallen and subsequently been hit by a falling rock. As a result of this, he had sustained a leg injury.

The casualty was made safe as he was in a precarious position on the crag, and then lowered down and carried to the roadside on a mountain rescue stretcher to the waiting ambulance.

The Team members then returned to Castleton to continue to fund raise for the team and have a chat to the passing Bank Holiday visitors. 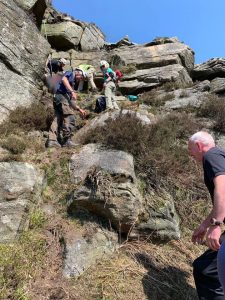