The team was called as along with  Glossop Mountain Rescue, Kinder Mountain Rescue and  Edale Mountain Rescue after receiving a report that a fell runner, who was training for a long distance race had suffered an injury and was somewhere on the Kinder Scout plateau. The Kinder search plan was initiated and the 4 teams began the organised and co-ordinated search approach required in such circumstances.

Buxton Mountain Rescue Team rv’d at Edale and quickly deployed three sections to start searching various routes onto Kinder. As section 3 was commencing their route they met the runner who had managed to self evacuate off the plateau. The casualty had a  painful injury to his ankle, and was in some discomfort, but showed much determination to get off the hill under his own steam. 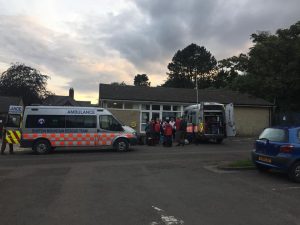