Both teams deployed up the hill to the casualty’s location. On reaching the casualty, team members assessed and stabilised the injury, and made arrangements for the evacuation via stretcher back over Grindslow Knoll and down to Edale.

Due to the location, and the circumstances, a request was made to the Maritime and Coastguard Agency for a helicopter evacuation. The Agency were able to oblige and Rescue helicopter 936 was able to assist with the evacuation. With a flight time to incident site of about 50 minutes, the teams began the slow stretcher carry off towards Edale. After receiving communication from Rescue helicopter 936 that they were 10 minutes flight time away from the stretcher party, a landing site was identified, and the helicopter subsequently landed close by. The casualty was transferred to the helicopter, who took the casualty to a hospital in Stoke, before returning to its base at Caernarfon Airport.   Team members then walked back down to Edale, grateful for the assistance of the Maritime and Coastguard Agency helicopter crew.

Whilst this rescue was underway, a call out was also in progress close by on Mam Tor. It was turning out to be a busy, “hot” day. 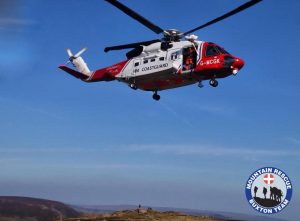