The team’s assistance was requested again by Derbyshire Constabulary to assist with an incident at Ringing Roger, early afternoon on Sunday 21st April.

The team attended along with Edale Mountain Rescue Team and quickly deployed up to the casualty’s location. The casualty was a female on a Duke of Edinburgh  walk who had injured her ankle. The injury was assessed, and pain relief given, before the ankle was splinted and the casualty placed in a vacuum mattress and put onto a mountain rescue stretcher. The casualty was then carried down to Edale where she was handed over to the DoE leaders for onward transport to hospital.

The volunteer rescue team members had been involved in 5 rescues over 3 days during the hottest days of the year so far. As part of the standard response to call outs, 6 response bags, containing medical equipment, oxygen,  entonox, splinting and securing equipment, and a stretcher are typically deployed and carried up hill to site; needless to say, these were hot and sweaty rescues in untypically hot conditions. 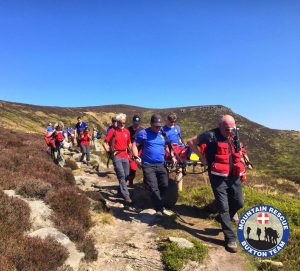 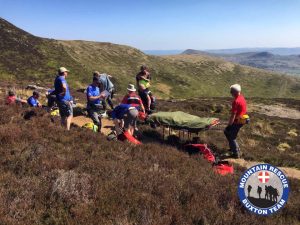