The team was called out to a 62 year old female who was out walking with friends in Macclesfield Forest when she slipped whilst descending a path, sustaining an ankle injury.

The team was assisted by members of the NWAS HART team, who helped carry the casualty on a mountain rescue stretcher, for a short distance up the track to a waiting NWAS ambulance at the roadside. 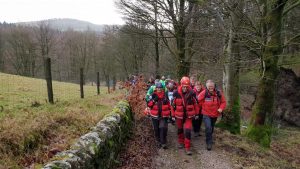